All Tips
Most shops are familiar with CNC machining centers using CAT40 or BT40 tooling. These machines are quite common and are a critical part of manufacturing today, offering typical spindle speeds up to 15,000 RPM. However, developments in new spindle technology are providing shops with much higher speeds, often exceeding 50,000 RPM. How can these new spindle designs offer such high speeds? What are the major design differences between a standard speed and ultra-high-speed spindle? This blog will examine 6 key differences and how they support ultra-high spindle speeds. 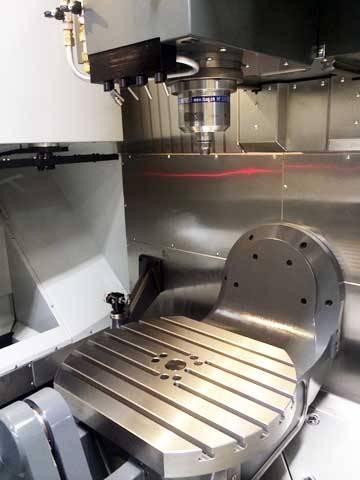 For most CNC machining centers, the spindle and driving motor are two separate components. The link between the two is a cogged belt. This allows a variety of motor types (power & torque) to be used. However, for speeds beyond 10K, the belt adds vibration, heat and wears out quickly. Therefore, most high-speed spindles utilize an integral motor design where the spindle shaft is surrounded by the motor stator. It is all combined in one package: motor, tooling and rotating shaft.

For conventional speed spindles, the cutting approach relied upon a high torque, high chip load concept. The driving motor, connected by a belt, would amplify the torque available at the cutter. However, an integral motor spindle does not have high torque, it has high speed. And, as power is directly related to material removal, and power is also derived from (speed x torque), the cutting approach when using a high-speed spindle is different. Cutting tools are typically smaller diameter, have less depth of cut per pass, and move at faster feed rates compared to the cutting approach of a conventional machine. 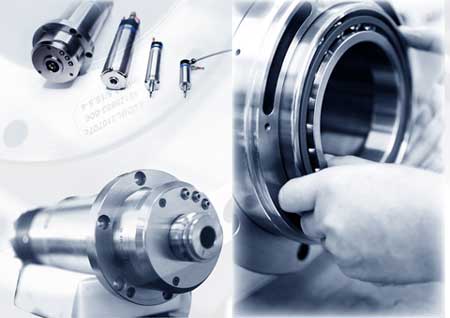 A high-speed spindle must have different bearings than a conventional speed spindle does, thanks to significantly higher speeds. How can it be possible? The most common type of bearings used today in any spindle are angular contact ball bearings. The contact angle provides support for both radial (X,Y) and axial (Z) loads. That is true for all spindles. The main difference for high speed would be the ball material. In a conventional bearing the balls would be made from bearing grade steel. For ultra-high speed, the balls are made from silicon nitride ceramic. How does this help? One limitation on a ball bearing is the centrifugal force acting on the balls as they rotate within the bearing race. This is affected by the mass of the balls. At super high speeds, the steel balls will become stressed and even begin to deform slightly as they rotate. This deformation reacts with the steel race and leads to heat and rapid wear. The ceramic balls are stiffer, lighter, and stronger. So, the use of ceramic balls and a steel race in a hybrid-ceramic bearing, boosts the acceptable bearing speed significantly without sacrificing bearing life.

All bearings must be lubricated. As the balls rotate around the race, and are subjected to loading, there will be movement between the surface of the balls and race. If there was no lube, the bearing would quickly wear out. In the past, grease was the most common and simple method of bearing lubrication and provided a simple solution to conventional speed spindles. Ultra-high speed, however, often requires a more complex bearing lube system. For ultra-high-speed spindles, oil-air systems are most often used, including an oil tank, pump and mixing blocks. These systems provide a very precise amount of oil to each bearing to optimize the conditions within the bearing. In some cases, to maximize the efficiency, oil is delivered through tiny bores located in the bearing race itself.

Conventional speed, belt-driven spindles use a separate driving motor. This motor may have been an AC or DC motor and was typically air cooled. The motor probably has air cooling fins or may also have a fan installed. This technique works very well to remove the heat generated by the motor winding and motor bearings. However, it does not remove any heat from the spindle bearings. For ultra-high-speed spindles, utilizing an integral motor design, heat can be a major issue to deal with. There will be significant heat generated by the motor winding, rotor and spindle bearings. To maintain accuracy and bearing life, this heat must be removed. So, most ultra-high-speed spindles will require an external liquid cooling system. The cooling liquid, usually a glycol-based water or light oil, is continuously circulated through the spindle housing and a chiller to remove as much heat as possible. Generally, the goal is to maintain the spindle as close to room temperature as possible, 26° C (79° F). Why does this make sense? Wouldn’t it be better to chill the spindle colder? Actually, when parts are produced at high tolerance, they only retain the dimensions at the same temperature at which they were made, which is room temperature. So, to maintain tight bearing fits and precision, the spindle needs to remain at room temperature.

Everyone working in manufacturing is familiar with CAT and BT tooling systems. These spindle tooling systems have become the industry accepted standards. However, as spindle speeds increased, the tooling systems began to reach their safe limits. Both the CAT (US) and BT (Japan) tooling standards were based on a taper-contact only design. This has worked and provided a simple and accurate system for conventional spindle speeds. The problem is, when you increase the spindle speeds, centrifugal forces begin to open the spindle taper. As the taper opens, the tool holder is pulled back into the taper. This will affect the Z axis accuracy and will create some mechanical problems releasing the tool after the spindle stops. It can get stuck. I can still remember some CAT40 spindles, after running up to 25K, that could not be removed from the taper without the help of a hammer! That cannot be good for the bearings.

So, for ultra-high spindle speeds, a new solution was found: a system developed in Europe called HSK. The HSK standard was created using a two-point-contact system - both taper and shoulder. In the CAT/BT systems, there is no shoulder contact, only taper. In the HSK system, the tool holder locks up solid against the end of the spindle shaft. This ensures that, as the spindle rotates at high speed, the tooling is secure, accurate and solid. The HSK tooling system is more expensive, due to the much higher precision required. And don’t forget balance! Tool holders should be balanced to G2.5, at a minimum. But that is a topic for another blog!

Today, ultra-high-speed spindles are becoming more mainstream. The cutting tool, motor and bearing technologies are advancing rapidly, and machines are becoming more productive due to higher spindle speeds. It is important to understand, however, what makes the new spindles tick, and how these differences affect production capacity. High speed spindles are more complex, use better hybrid ceramic bearings and more complicated bearing lubrication. Spindle cooling is also a requirement to control heat and maintain accuracy. And, a whole new tooling standard, HSK has emerged to satisfy the needs for accuracy, safety and precision using ultra-high-speed spindles.

Next Post: Holding Parts with a Porous Vacuum Chuck